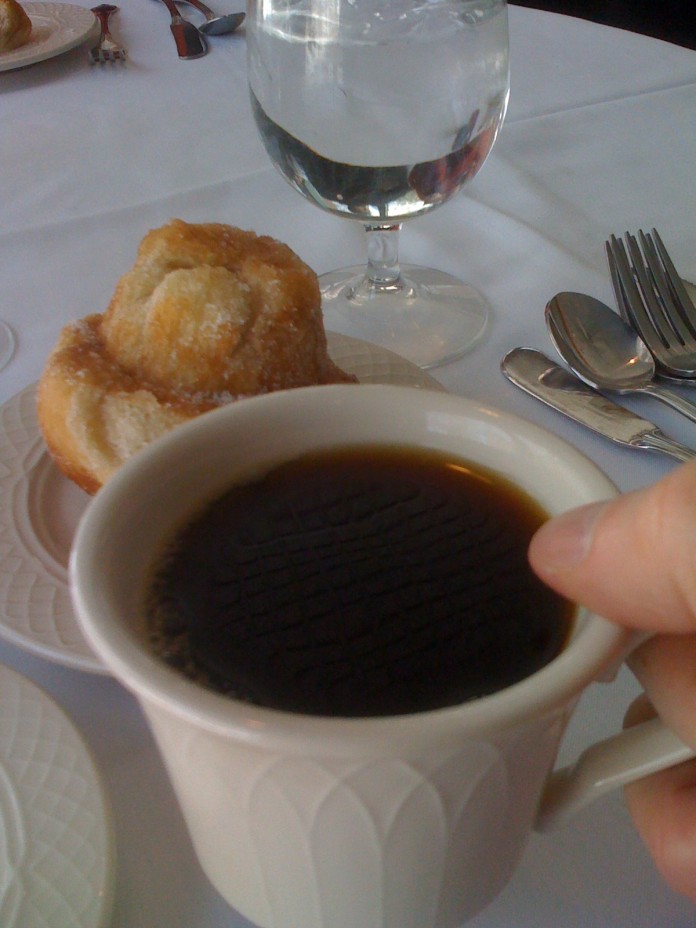 Well, seeing as I was headed to the ol’ Pandl’s in Bayside for brunch with the missus anyway, I promised my ol’ mate Benson I would scribble down a few words for his publication. It is a bit of a tradition for the wife and I to indulge in a monthly Sunday visit – me for a Bloody or two, her for a Mimosa or three – and indulge in the victuals to an unseemly degree.

Pandl’s was abuzz with activity, but we had the good fortune to be seated immediately at a fine table with a spectacular view of trees, shrubs and a bird feeder that was under constant siege by a number of skirmishing squirrels. “Entertainment au natural!” exclaimed the wife. “The closest thing I’ll ever see to it, anyway,” I replied. The waitress greeted us, took our drink orders and gave us leave to assault the buffet.

Plates in hand, we began at the fruit, salad and cold seafood station. My approach is to put as many different tastes to tongue as possible so I dibbled miniature servings each of cantaloupe, pineapple, grapefruit, shrimp, salmon, smoked trout and crab legs on the ol’ Huffingshire plate. Mrs. H, not a fan of seafood nor any other food with an excess of flavor or texture, made only fruit selections – the same fruits as I along with watermelon and strawberry.

I must say my first plate was a raging success – not a rogue morsel in the lot. Mrs. B had slightly lesser success, finding the strawberry a tad spongy and the watermelon roughly cut to include a propensity of green.

Beverages surpassed adequate. Bloody Mary did the trick and the fresh grapefruit juice was exceptionally refreshing. I assumed the missus was content as measured by her rate of Mimosa intake.

One bally choice you simply must exercise at a Pandl’s brunch is to order something off the brunch side-menu. These are generally highlights of the visit prepared by order in the kitchen – you won’t find these options laying about the buffet tables. I decided on the mini lamb chops and Mrs H went for blueberry pancakes. Service was quick; results were mixed. My chops were an exercise in perfectly seasoned rubber – sauce and mint jelly provided great flavors if you don’t mind gnawing on a rummy inner tube. The wife’s cakes, however, were flawless.

We each made our final raid at different tables. I went to the featured Cajun table to have a custom crawfish-shrimp étouffée fired up on site and added a sampling of meatloaf and browned potatoes on the side. I arrived back at the table to find the missus distressing over a sea of salt scattered across the surface. Apparently the s. grinder had ruptured, either from wear or sabotage, when she picked it up to season her cheese omelet and American fried potatoes. Happily, her plate remained intact and the spill was promptly cleaned from the periphery.

Aside from that brief discombobulation, this round of food was triumphant. The Spanish-speaking chef who crafted my Cajun dish was more than up to the task. The meatloaf, with benefit of fine mushroom gravy, was tasty, if not pleasing to the eye. And Mrs. K thoroughly enjoy her brunchtime standards.
A cup of coffee and a morning bun later, we were ready for surrender. As we departed, the chirpy elderwoman at the coat check, as she has oft done in the past, asked in reverent tones if we had sampled the Bananas Foster. I felt we let the cloakstress down when we said no, but we’ve had it before and yes, it is indeed to die for.

All in all, it was once again a gratifying visit. I recommend it as worthy of regular consideration. Benson tells me rating the experience by assigning stars is de riguer, so I will grant it no less than seven. 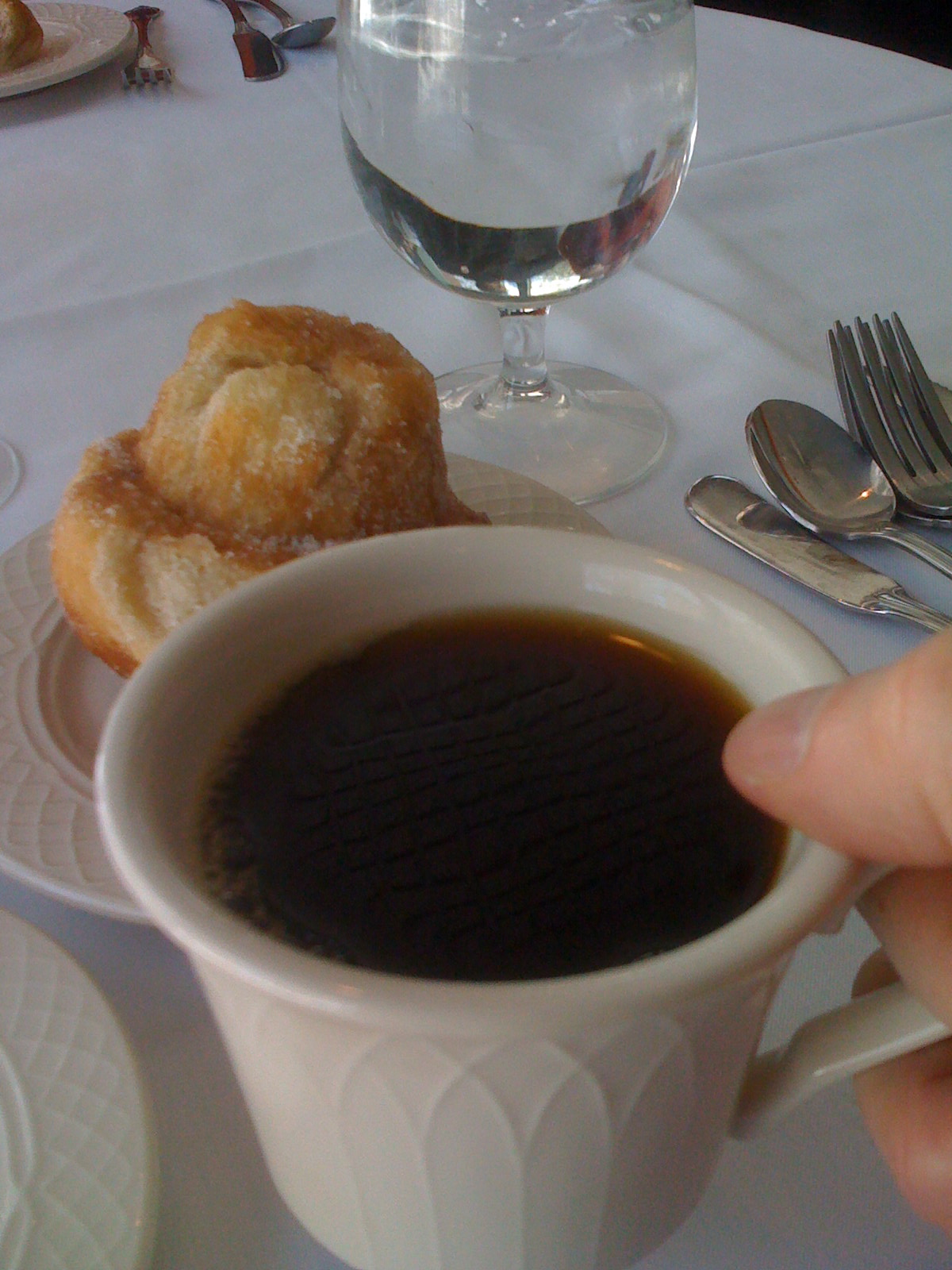