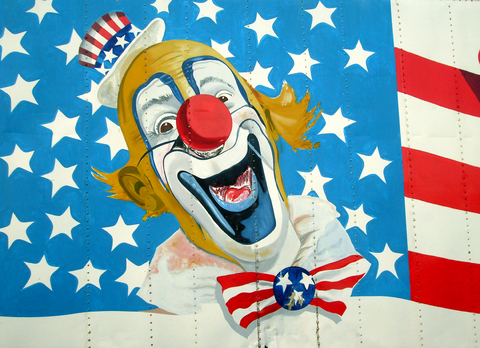 Those who attended a Fourth of July parade last weekend probably encountered more than their fair share of flag-waving clowns – which is to say, one or more. The fact is, most adults find clowns unfunny, irritating and even downright evil. Granted, this statement is not based on scientific polling, but on informal conversations with every single adult we have ever talked to on the subject.

Many adults, however, probably assume that kids love those floppy-shoed, pajama-clad, face-painted fools. Well, they don’t. In fact, A University of Sheffield study of more than 250 children found that “clowns were universally disliked” and that some kids found clowns to be “quite frightening.”

So how do you suppose it affects children when these unpopular and upsetting creatures wave the American flag in their faces? We posed that question to clowns, kids and Mequon parents during several suburban Independence Day parades.

We started by giving Shingles the Clown a chance to defend his shenanigans at the Shorewood parade. “I understand the concern, but the tradition is boogity boogity boogles! Goooga tooga bleeeble!” He then honked the horn in his baggy pants pocket and skipped away.

At the big Cedarburg parade, we asked 8-year-old Jimmy McStoogan what he thought of the clowns. At first, he was loath to answer. “I dunno…” he mumbled. When prompted and scolded by his parents, he screamed, “I don’t KNOW! They suck, I guess!”

We found the VanderStomp family from Mequon at the same parade and asked the parents, Janine and Jonas, what they thought of the clowns. “Can’t stand them,” volunteered Janine. “They’re lowbrow and vulgar. I’m glad they’re not in Mequon!”
When asked what effect flag-waving clowns might have on his two children, Jonas replied, “Can’t be good. Might lead to them hating America. Could turn them into drug addicts or socialists!”

On Thornapple Court in Mequon, the neighborhood celebrates every Fourth of July with a round robin and a cocktail party. There are no parades, no honking horns and no clowns. This is no accident. “As a community, we’ve rejected the idea of celebrating freedom in a crude, obnoxious manner,” declared Harriet Stimple. “And that certainly includes clowns!”

“I’ve been a Mequon police officer for 15 years,” offered a burly man, dressed in a Patagonia Puckerware® shirt and Cole Hahn loafers, who refused to give his name. “And if I ever saw one of those little cars stuffed with 10 or 20 clowns driving down Mequon Road, I’d drag them out and Taser each one of them within an inch of their goofy lives!”

“We simply believe that clowns cheapen the holiday – any holiday really,” Regis Flautenhesser summarized. “They besmirch America. We will not have our children terrorized, traumatized or demoralized by these blatantly boorish Bozos!”