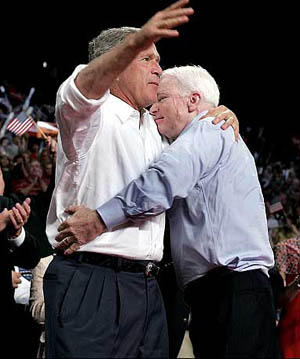 As the world celebrates the inauguration of Barack Obama, there is a rare and distinct melancholy permeating Mequon. In a city where Republicans always win stunning majorities, where they can always count on loyal, dogmatic support no matter how lacking the candidate, there exists a palpable wave of regret for George W. Bush’s exit.

To gauge the sentiment, we sat down at local coffee house Café Forte with a random sampling of politically active Mequon residents: five who described themselves as devoutly Republican, one lukewarm Democrat and one Presbyterian dentist.

Sam, an animated Republican, took a sip of his Sumatran Bold and started right in, “Say what you will about President Bush, but he never once raised my taxes!”

Three of the Republicans clinked their mugs and nodded. Sam stood up to high-five Danny, a GOP sales manager, sitting across the table. “Hail to the chief…” Danny replied, then sat down shaking his head. “But I’m afraid those days are over.”

Jerry, a lawyer and the lone Democrat, was the only dissenter. “But for all the taxes you saved, you must have lost ten times that in investments and 401Ks. The economy is in a shambles!”

“The economy tanked, yeah, but just imagine how bad it would have been with a Democrat in the White House!” answered Sam.

“Ummm, excuse me,” said Danny. “What planet are you from? Cutting taxes is good.” The table broke into laughter and a smattering of applause.

But the caffeinated Democrat wouldn’t let up. “I won’t even get into all the other Bush atrocities, like torture, Hurricane Katrina, shredding the constitution, and inflicting us with incompetents and scoundrels like Miers, Gonzalez, Rumsfeld and Cheney.”

The table fell quiet. “I guess you would know,” conceded Jerry.

At that, the air was taken out of the debate. Everyone resented Jerry – and he was irritable and jittery. “I say good riddance to Bush and good day to you all!”

With the absence of any contradiction, the rest of discussion consisted of recalling all the best qualities of the Bush years. Three minutes later, the group disbanded and the melancholia followed the majority out the door.

“What that socialist doesn’t understand,” Sam declared at the register as he purchased some breath mints, “is that when you cut taxes for market-drivers like us, everyone benefits.” Sam dropped his 38¢ of change into the tip jar, winked at the lad behind the register and moved on.